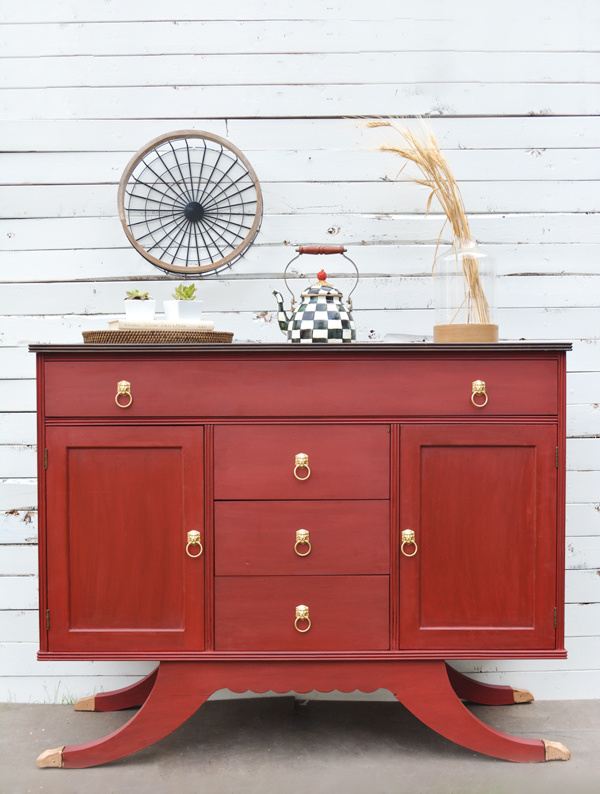 Ok, before we get into today’s furniture makeover I have to share some super exciting news! If you follow me on facebook or insta, you’ve already heard, but for those of you who don’t I want to fill you in! I’ve teamed up with 24 other amazingly talented bloggers to bring you an awesome holiday pop-up blog called The Holiday Collective. It’s your one stop shop for the best holiday DIY ideas including crafts, recipes, printables and so much more.

The group of ladies involved are some of the most talented out there, and I’m just lucky to be a part of it. The site officially launched yesterday, but today is the first day of fresh new content.

From now until December 24th, you can count on THC to bring you new projects that won’t disappoint and are sure to get you in the holiday spirit.

I’m usually a no Christmas until after Thanksgiving kinda gal, but sometimes you just have to make an exception 😉 And this is a pretty good one.

Alright, now that I’ve got you in the holiday spirit, let’s switch gears a little and talk about today’s makeover. Although it is red, so I guess it’s got a bit of a holiday vibe. You may or may not remember this piece because I got it…oh, idk like over a year ago.

But it finally got the love it deserved. I found it on craigslist for $40. STEAL. It sat on our porch weathering pretty much every season, so it definitely had it’s imperfections. 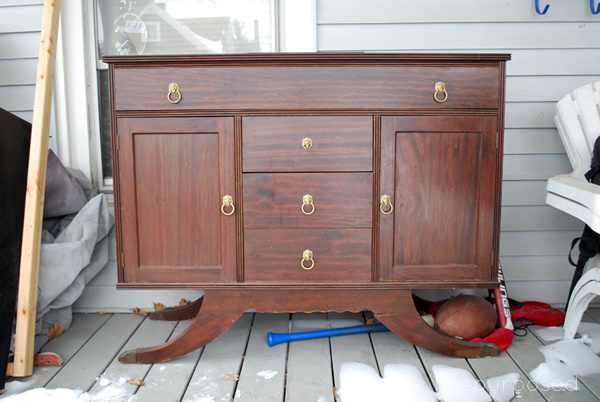 A friend of mine contacted me a while back about the dimensions of a piece I had recently done, and unfortunately it wasn’t going to work for her space. But I did have this guy available and she was totally interested. We talked about style and colors and after deciding on Red, I sent her off to a couple paint sites to see which shade she liked.

She sent me this link which uses Tricycle by Miss Mustard Seed and Dark Wax by Annie Sloan. Done and done. Although I’ll be honest, I wasn’t super thrilled about using MMS. I’ve only used it once before here, and wasn’t a big fan. But I was willing to give it a second chance. 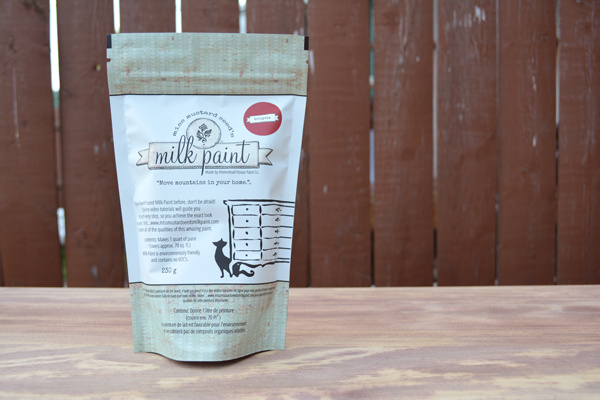 My friend wanted a pretty rustic, distressed look so I wasn’t too concerned about the paint sticking everywhere. But I had some bonding agent left over so I mixed that into my first batch of paint just for a little more control. I followed the directions on measurements and used my whisk to mix it all up. It still looked SO watery though so I threw in a little extra powder. 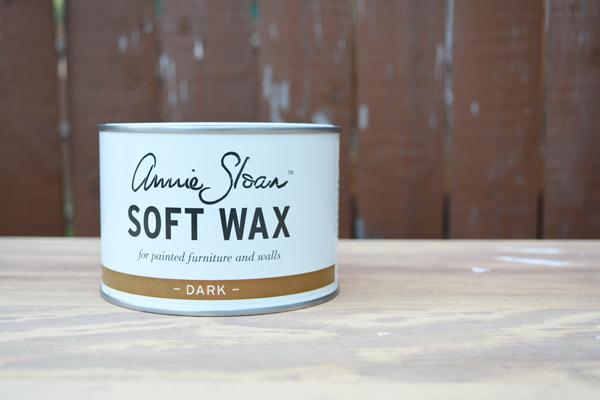 After the first coat I wasn’t too worried because I remembered this is how it went on the last time. Super thin and not great coverage.  And it’s the first coat, which never looks great. One thing I do love about MMS is how quickly it dries.

This is a good thing and a bad thing. Good for me because I am so impatient. Bad because it’s also super drippy so you want to make sure you brush it on evenly.

After the second and third coats I started getting frustrated. The coverage was awful and it was SO streaky. I tried adding more powder to my mix and it just wouldn’t thicken. I don’t know if there is some secret trick, but every other paint powder I’ve worked with, the more you add the thicker it becomes. Not the case with MMS. So I had a super liquidy paint mixture and it was so drippy and thin and going on super streaky.

I was starting to get nervous. I honestly thought I was going to have to buy a different brand of paint and just paint over it. The only thing that kept me going was the fact that I knew she wanted a distressed look and I was going to be adding the dark wax. 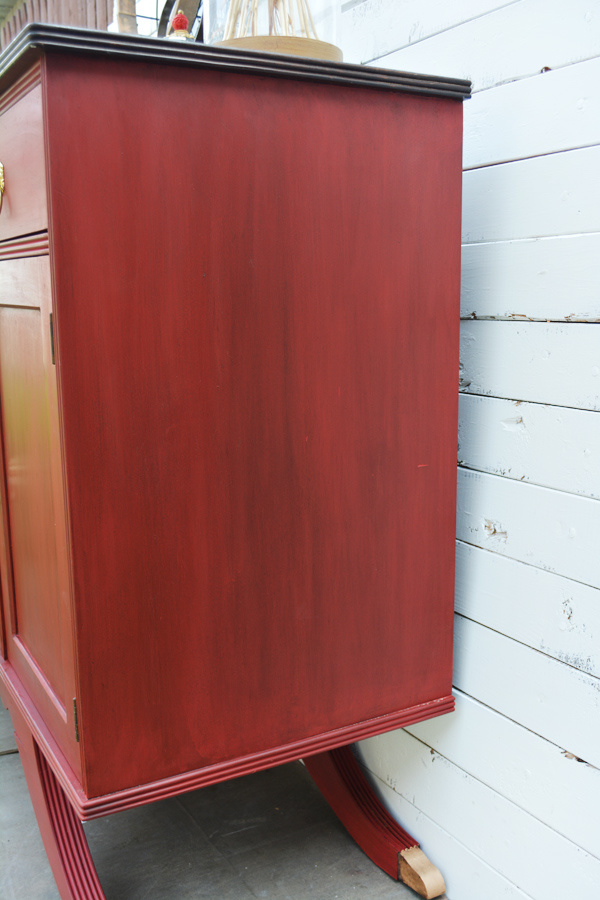 And the dark wax was my savior. After probably like 6-7 coats of the Tricycle and not much difference in appearance I called it quits and grabbed the wax. It blended in so well with the red and gave it a super pretty layered look with lots of dimension. Thank god. 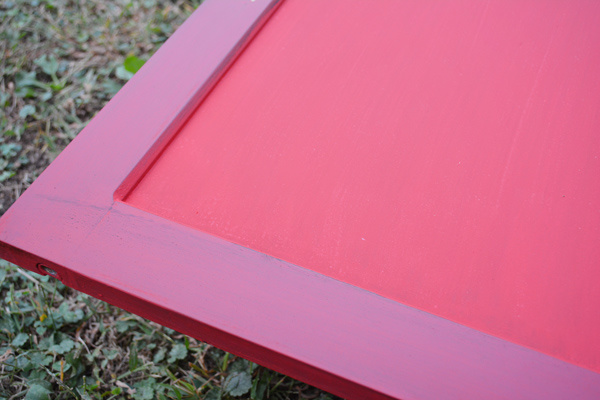 My friend left it up to me whether or not to stain the top and I’m glad I did. Although, I think the days of it hanging out on our porch really sealed in all that old stain and added dust and grime. Hubs helped me on this one and we each did half of the top which took quite a while and some serious elbow grease.

Hubs also stained and sealed the top for me. Even though I can work outside with a mask, I’ve been trying to stay away from all the potent oil based products out there. I don’t wan to take any chances with Baby Berto 😉

He used my go to, Dark Walnut, and then sealed it up General Finishes Satin Top Coat. 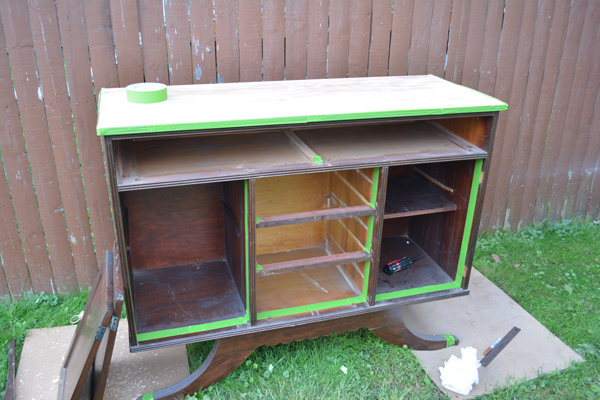 Of course when I got this piece, one of the seven drawer pulls were broken. I probably could have gone on the hunt to find one matching one, but I decided to just get all new ones instead. D. Lawless Hardware was gracious enough to send me some new Lion Head Pulls and they fit perfectly.

So as much as I love Marian, I’m just honestly not a fan of her paint. I really want to love it. But I don’t. I need something with a thicker and smoother consistency that provides better coverage and isn’t as streaky. But, I know her style is super vintage and has that worn look which is probably part of the reason the paint is the way it is.

Seriously, I love everything she does but I just can’t get on board with the paint! And MMS definitely isn’t a paint you would want to use on a more modern piece where you want a very clean, cohesive finish.

So Marian, if I’m doing something wrong, let a girl know!

Luckily, this piece ended up turning out pretty great and my friend loves it so that’s all that matters. 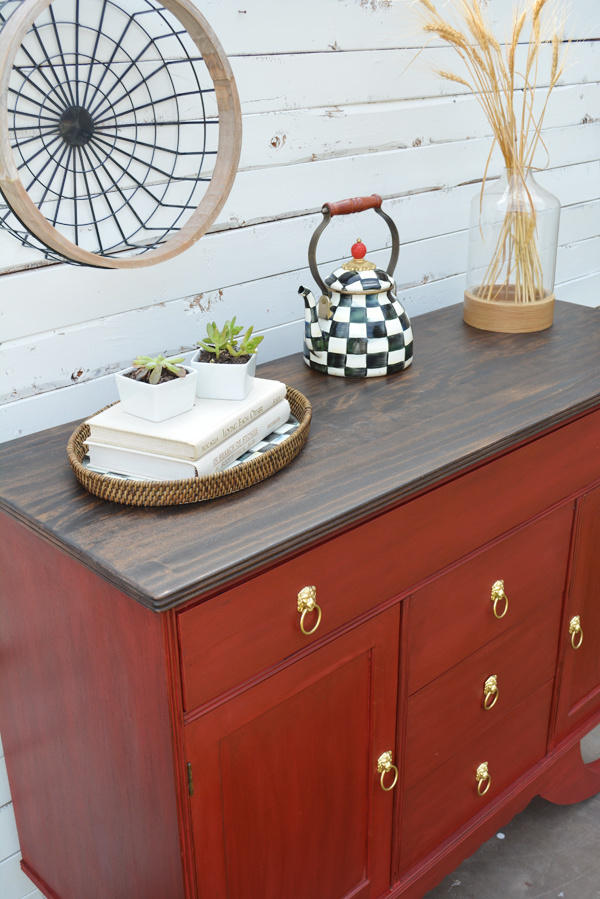 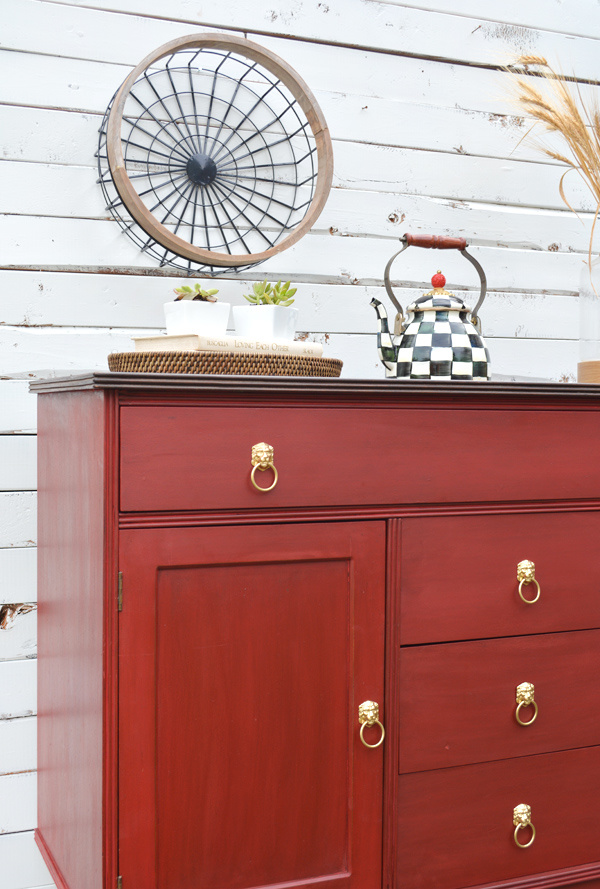 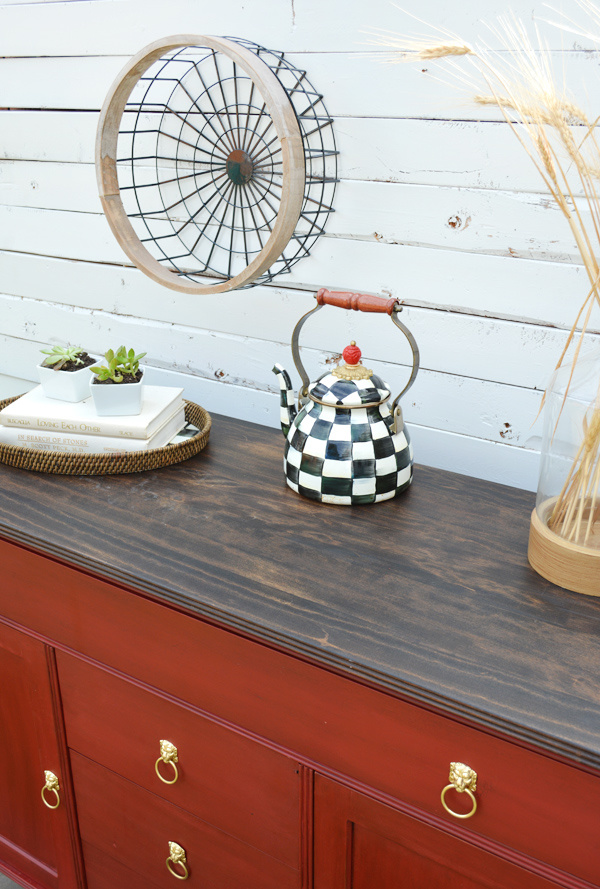 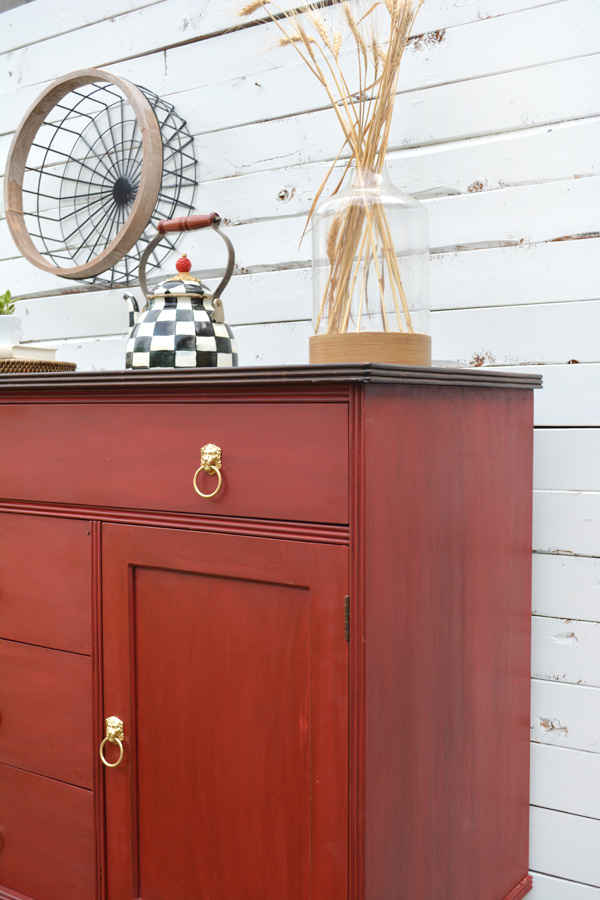 Have you used MMS paint? Are you a fan? I’d love to know what your experience has been like! 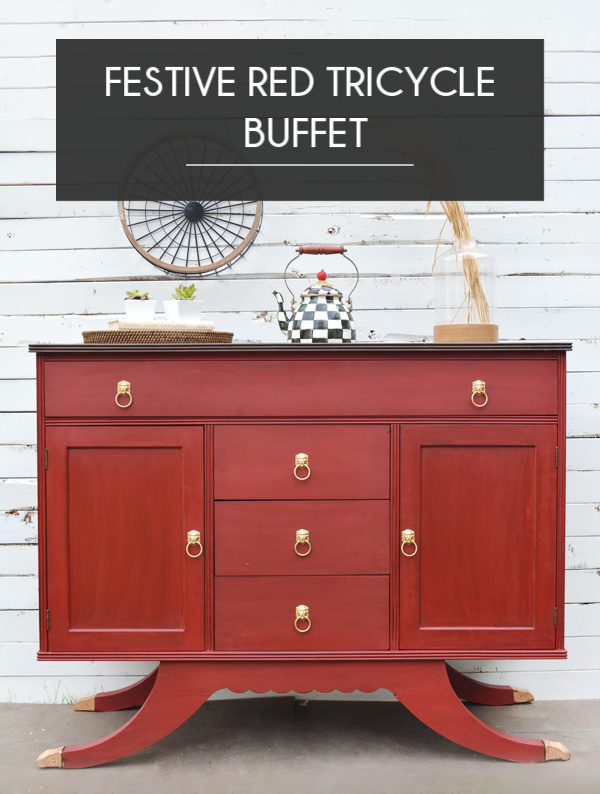 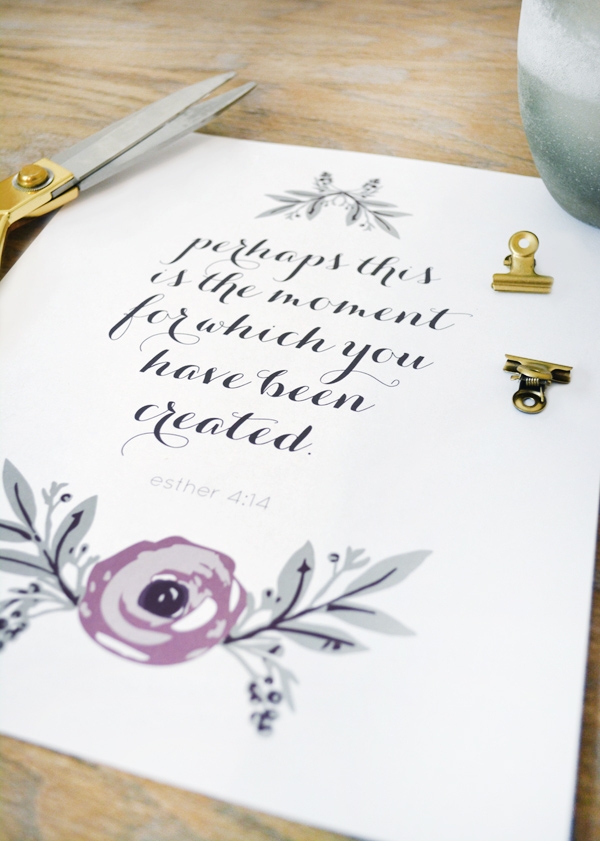 5 Tips for Finding the Best Furniture on Craigslist 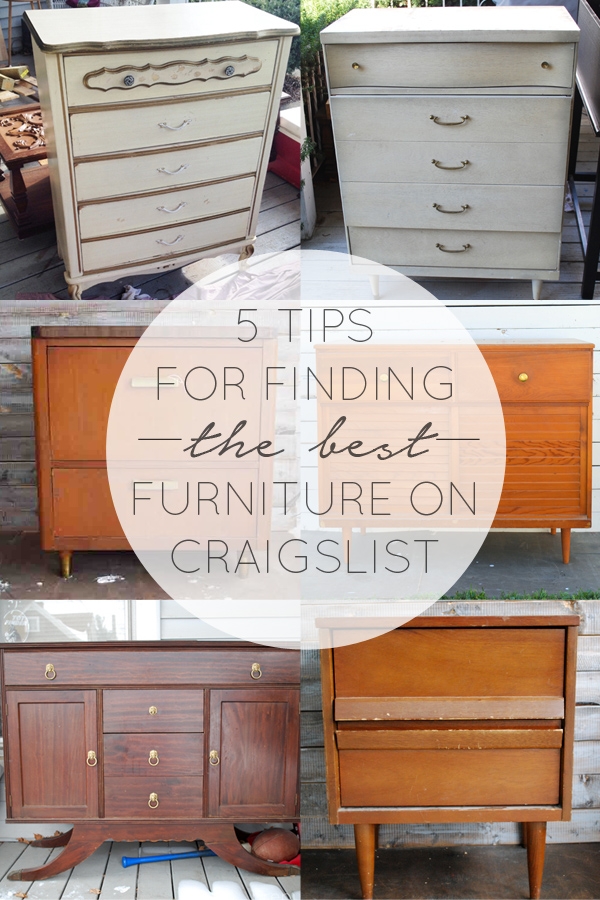 From our family to yours, wishing you a very merry